In the Beginning . . . Quality was Already Second-Rate

Right from that first porcelain teapot made by China (see earlier post) for the Europeans:

export tea ware was designed specifically for the Western market

(and yes, that meant a lower quality of porcelain—partly just to meet demand),

particularly because 16th- and 17th-century-Europeans seemed more concerned about teapot design—and the status it embodied—than about how the tea tasted in the pot.

The Chinese, after all, preferred using porous stoneware teapots, which slightly retained tea’s aroma and flavor.

So porcelain teapots, in both shape and ornamentation, quickly and increasingly reflected Western preferences.

While the Europeans, Too, Looked to Maximize Profits

For their part, 18th-century-European merchants did all they could to streamline the process of ordering/shipping/selling tea ware.*

The goal, after all, was to make money. 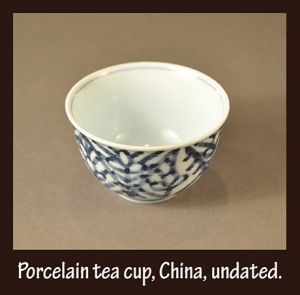 Tea and Coffee for the Masses—So the Elite Drank Chocolate

The Point of a Saucer, Necessitating New Rules for Drinking Tea

Meanwhile, the absence of a handle on teacups—and the presence of a deep saucer—informed tea drinking etiquette.

First off, a saucer was useful to hold that tea-spoon (see teaspoon post).

Second, because gracefully holding a thin porcelain cup filled with steaming hot liquid was liable to be really challenging, people held the saucer instead. And poured tea into the saucer to cool it. And drank directly from the saucer.

Eventually the upper classes wanted to re-distinguish themselves from everyone else: drinking from the saucer became gauche.

By 1760, tea and coffee cups with handles were in style, although scholar Shirley Mueller has tea sets from as early as the 1740s that include handled coffee cups.† 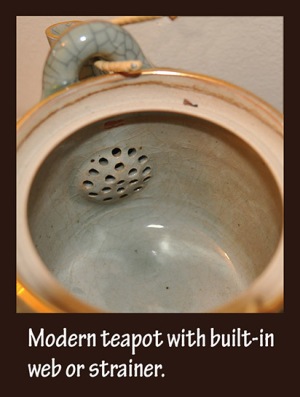 And that pesky problem with the tea leaves clogging the teapot spout?

As teapot design evolved, a web or grate—with an increasing number of holes—separated the body from the spout. This kept the tea leaves in the pot while allowing the liquid to easily flow through the spout.§

The imported china or porcelain teapot of the late 1700s was a very different thing than those first teapots that delighted the Europeans.

As Mueller puts it:**

What began as Chinese in inspiration and appearance became Western in nearly every aspect in less than one hundred years. . . . By the end of the eighteenth century, the only relationship the Chinese export teapot had with China was its location of manufacture and the tea into which it breathed life.