If you haven’t had rooibos yet, now is the time—especially if you are looking for a delicious tea that doesn’t have caffeine.

Although rooibos is commonly called “tea,” it is really an herbal tisane. While true tea is produced with Camellia senensis, rooibos (Aspalathus linearis) is a legume, the same family of plants to which peas and clover belong.

From a red bush

Rooibos is native only to the Western Cape of South Africa, where is it a popular drink; translated from Afrikaans, rooibos means “red bush.”

Still produced only in South Africa, young branches are cut from the shrub once a year, from December to April. These cuttings are finely chopped and bruised to promote oxidation, are then moistened and layered (a “sweating” step), and finally are dried. During this processing, the green leaves turn red, yielding a flavor that is somewhat woody, sweet, and creamy.

And then there’s GREEN ROOIBOS 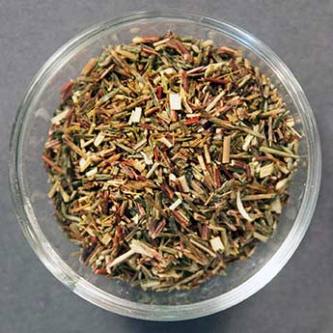 This variety is less known.

Still from a red bush

—but by skipping the oxidation step, the rooibos retains its green color and results in a fresh, slightly tangy flavor, somewhat akin to green tea.

And with loads of health benefits

Both rooibos varieties are low in tannins, high in antioxidants, and naturally caffeine free (in Japan, rooibos is called “Long Life Tea” due to its health benefits).

However, according to the South Africa Rooibos Council,

Around 12,000 metric tons of rooibos are produced each year. About 7,000 tons of that are exported to over 30 countries, particularly to Germany, The Netherlands, Japan, the UK, and the US.

To brew rooibos, use boiling water and a brew time of 5–10 minutes (you can’t overbrew it). Enjoy it hot or iced!

One thought on “What Is Rooibos Tea?”