Clearance sale? Heck yeah! Years and years ago, when I picked up this tin filled with teabags, I did so only because I bought it for next to nothing!

I think I liked the tea, but I do remember that I nearly tossed the tin—but then stuck it in with Christmas decorations because, well, it’s not everyday that you run across an elephant dressed as Santa and carrying a bag of gifts in its trunk. And this isn’t an overtly cartoonish elephant either, which made the tin a bit intriguing to me. 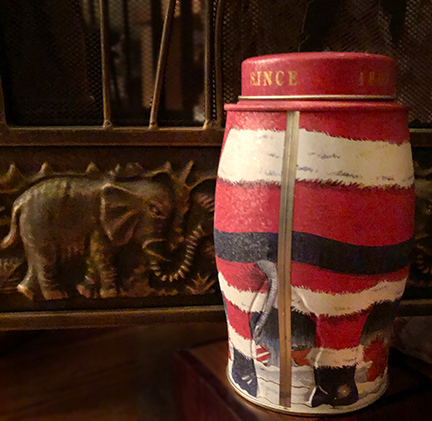 A quick online search brought up this same Santa elephant tin as “vintage” (what does that make me then?!), but the company behind this unusual tin is still very much around and still produces elephant tea tins. 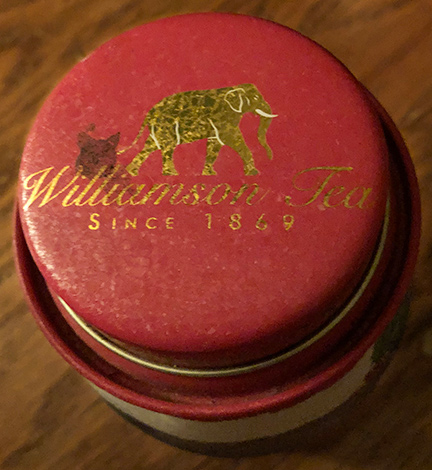 Williamson Tea, according to this tin, has been around since 1869, an era when

as early as 1866, when writing about Brazilian tea, The Grocer quipped: “All the world is intent on supplying all the rest with tea” (Rappaport 2017:114).

It turned out that not all the world could actually, successfully, grow tea, but Kenya was one of the countries that did succeed. Currently, Kenya is one of the world’s top exporters of tea, with tea being the country’s most valuable export product.

And today, according to their website, Williamson Tea is “committed to growing the highest quality sustainable teas to the benefit of Kenya, its communities, wildlife and environment.” While they offer a limited number of teas, each tea is grown, without pesticides, on one of their own farms in Kenya.

And the elephant tin?

Williamson partners with the David Sheldrick Wildlife Trust, which, according to the Williamson website, is

the most successful orphan-elephant rescue and rehabilitation program in the world and one of pioneering conservation organisations for wildlife and habitat protection in East Africa,

and a portion of each tin sold is donated to the trust.

My elephant tin makes me smile, and also reminds me that its real-life counterparts are benefitting from tea.