Shrubs require only three ingredients: fruit, sugar, and vinegar—although it could be argued that the Babylonians’ date vinegar-and-water drink was an early shrub, and that has only one of the three listed ingredients.

Regardless, today we recognize a shrub as a fruity vinegary drink that may or may not include alcohol and that can incorporate other things, such as tea.

But for any shrub, you always need vinegar, “sour wine.”

We don’t know exactly who came up with vinegar or how it was first discovered, but those Babylonians living around 5000 BC are often given credit. Centuries later, Hippocrates (460–377 BC) used vinegar solutions to clean and treat wounds and recommended a honey-vinegar concoction for coughs. In the 900s AD, Sung Tse—credited with establishing forensic medicine—washed his hands with sulfur and vinegar while conducting autopsies (Johnston and Gaas 2006).

Vinegar continued to be used medicinally through the ages, with a huge spectrum of application. In the late 1700s, it was prescribed in the U.S. for such diverse ailments as dropsy, poison ivy, croup, and stomachache (Johnston and Gaas 2006)! An 1867 book adds a dubious remedy to the list:

Vinegar . . . is employed externally when an overdose of strong wine, spirit, opium or other narcotic poison has been taken. (Olver)

And, until insulin was produced after its discovery in 1921, diabetics often drank vinegar teas in an attempt to regulate their blood glucose levels.

Meanwhile, alongside medicinal purposes, vinegar was used to preserve food and to make it safe. That Babylonian date vinegar–water drink made the water safer to drink.

And ages later, in colonial America, vinegar was used for pickling, salad dressing, and drinks (switchels and shrubs). A popular shrub comprised raspberries, sugar, and vinegar, which was an effective way to preserve fruit for later consumption. Alcohol, of course, could be added.

The name “shrub” came from the Arabic sharāb, meaning “beverage” (Bennett 8/20/18), with non-alcoholic shrubs being drunk in Turkey and Persia. Eventually Europeans included alcohol into the blend and the drink remained popular until the late 1800s.

Today, shrubs are making a comeback, either on their own or as part of a cocktail. Lisa, at TeaHaus, makes some incredible shrubs with all different kinds of fruit, vinegar, and tea. Endless combinations, endless possibilities. (In fact, if you live anywhere near Ann Arbor, you can get her incredible rhubarb shrub cocktail kit as part of a Father’s Day Pickup Package!)

Trying my hand at it—

Even though our stay-at-home order has been lifted here in Michigan and strawberry season is beginning, I have scarcely been out past my neighborhood and so the only fresh fruit I currently have consists of a couple kiwi and some apples. While apples would make an amazing autumn shrub, it doesn’t appeal to me much today. So I fell back on my frozen Very Cherry Berry Blend from Trader Joe, which has cherries, blackberries, blueberries, and raspberries (and nothing else!).

I combined a cup of the fruit with roughly a half of cup of sugar and let it sit at room temperature, although I neglected to label the jar with a bold “DO NOT EAT,” which meant that while I was away at work, a family member ate pretty much all the fruit out of it, which meant that it sat for fewer than 24 hours. For maximum flavor, you really want more than that. Oh well.

I strained what was left and added red wine vinegar and marzipan black tea (brewed strongly) from TeaHaus, beginning in a 2:2:1 ratio. I thought the almond flavor on a black tea base would add a nice note to the berries as I always add almond extract to my sour cherry pie.

It was a hard decision about the tea. I considered ginger grapefruit green tea, thinking the spicy heat and citrus notes would complement the berries, but then thought the citrus might fight with the vinegar. O’Connor’s Cream, with its chocolatey creaminess and suggestion of whiskey, was also a contender.

However, I liked the subtle almond flavor that came through the berry flavor. It was the right call on the tea. I ended up adding more tea and vinegar because the sweet berries were too syrupy (next time I’ll try less sugar, or better yet, use fresh sour cherries without the other, sweeter, berries). Here’s the beautiful color of the blend: 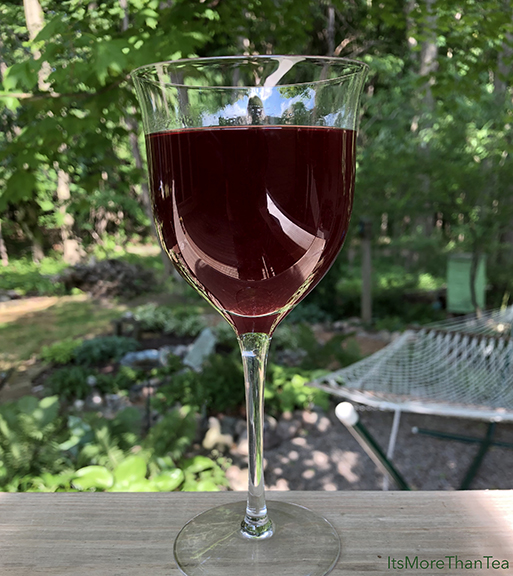 At this point, I should’ve refrigerated it to let the flavors mingle and mellow. Pressed for time, however, and you might even say impatient, I topped the shrub off with some sparkling water, adding it slowly until I liked the level of fizziness and flavor. Sparkling wine or another alcohol would also be excellent!

This fruit and tea shrub definitely was refreshing—and a new way to enjoy tea!

2 thoughts on “Add Tea to Your Fruit Shrubs!”