The great thing—or the downfall, depending on perspective—about being a fan of tea is that you can justify buying lots and lots of tea ware!

Sure, you only need one vessel that withstands hot water and you’re adequately equipped, but there’s tremendous appeal in having teapots in different styles, materials, and sizes. And we human beings can be masters of justification. For example:

I was awarded a small sum of money by participating in a research study, and the study was particularly obnoxious, therefore I owe it to myself to spend it entirely on a teapot that I don’t need in the least but the pot was handmade and I’m supporting an artist.

Hence this shiboridashi came home with me last February. 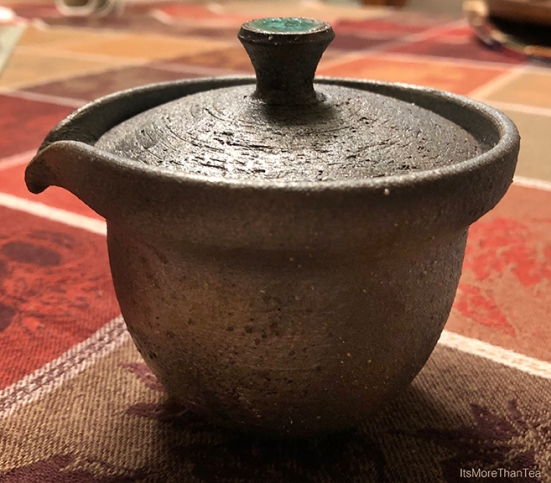 Now a shiboridashi is simply a small handleless teapot, a variant of Japanese teapots (there’s also the side-handled kyusu as well as the handleless hohin, which has a filter built into its spout). Its name means “squeeze out.”

Compared to a kyusu, a shiboridashi . . . has a wide, triangular open spout, like a houhin, which allows for fast pouring. However, it has no filter, instead relying on a small gap between the lid and the body, along with small grooves, to separate the tea from the leaves, allowing you to “squeeze out” the last drop. (Tezumi)

My shiboridashi was made near Shigaraki, a town in Shiga prefecture, Japan, so it’s a Shigaraki-yaki shiboridashi. This type of traditional pottery, made with a fire-resistant coarse clay, is known for its earth colors and rough texture.

Japan has six ancient kilns, with Shigaraki one of them. Centuries ago, Shigaraki tea utensils were esteemed, exemplifying “the aesthetic qualities of wabi (humble simplicity) and sabi (beauty in wear). . . . Wabi-sabi are two key aesthetic concepts of wabi or rustic beauty, both manmade and in nature, and sabi or change making things more valuable” (Kogei Japan).

Because it’s handleless, a shib is often used for teas requiring lower brewing temperatures so that you don’t burn your fingers when pouring the tea out. This one, being somewhat more high rather than squat, ostensibly can be used for hotter water, like for an oolong, black, or pu’erh tea, but I do find the pot rather hot to comfortably hold.

A shib is usually wider than it is tall, making mine a little more like a hohin in shape—or like a gaiwan, a Chinese lidded bowl. Both a shib and a gaiwan are well suited for large leaves, whereas the hohin, with its filter in the spout, can also handle smaller leaves. To pour tea out of a gaiwan, you must hold the lid so that you create a gap whereas that gap is built into the shib.

A shiboridashi, then, has several specific features.

Because a shiboridashi is small in size, it’s often used for pricy teas such as gyokuro.  Here, however, I brewed Benifuki, a Japanese black tea produced from a hybrid of C. sinensis var. assamica and var. sinensis plants, developed in the Kagoshima prefecture in 1965 (available from TeaHaus).

The interior of this shib has been raked, which allows the liquid to flow out of the pot while the lid holds the leaves back. 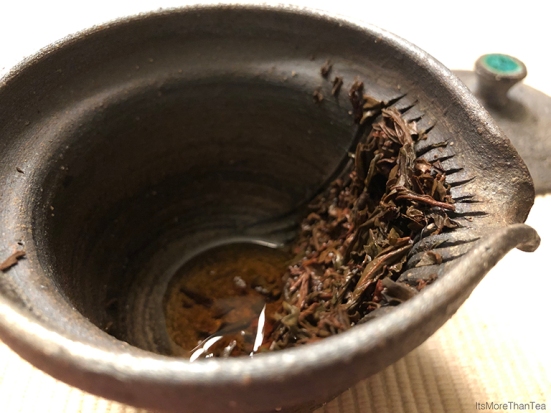 You can see how a shiboridashi is best suited for larger leaves because small bits of leaves will find their way out of the pot.

The pot’s size is ideal for making one cup of tea for yourself, especially when you want to rebrew your leaves a few times.

Or, if you have friends over (suspending our real-life pandemic-driven lives for a moment and imagining such times) or are still on friendly terms with those with whom you’ve been staying-in-place and you want to share an expensive tea with them, you can fill several small cups.

So, did I need a shiboridashi? No. Does anyone really need one? Probably not, especially if you generally drink teas that require boiling water. A handleless teapot can get very hot, making it difficult or impossible to safely pour.

But do I enjoy using it? Most definitely.

Beyond the fact that it makes a very nice cup of tea, its simple lines are appealing and it has a nice feel in my hand.

Further, its coarse clay and rustic quality are grounding—while that pop of teal glaze reminds me of the brightness that always peeks through, whether a wildflower stubbornly growing through cracked concrete or a kindness received on a dark day.

2 thoughts on “This Teapot Needs No Handle”