I know the season of thanks–giving probably isn’t the best time to rant, but I was recently asked yet again to send someone a sample of tea with “medicinal qualities.”

So here goes: All tea as well as most herbals provide health benefits (unless, of course, they contain high levels of contaminants, which is why you need to buy from trusted sources, but I digress).

Still, tea specifically seems to have a lot of benefits, with some scientific studies even recommending that we drink tea rather than water.

However, it’s then easy to make the leap and ask: Which teas are better/healthier than others?

But any tea is healthy because they all—black, oolong, green, white, and yellow tea—come from the same plant, but no specific tea is likely to “fix” anything.

At least, that’s my starting point.

Take, for example, migraine. I’ve read no end of headlines suggesting that tea can relieve a migraine, but as a lifelong migraineur, I can assure you that no tea will put much of a dent into a knock-down migraine. Nor will any tea relieve chronic migraine, that relentless disabling pain that dogs one’s every day and even every hour.

In fact, I get pretty annoyed with any headline claiming that tea has some apparently magical property of fixing anything.

Yes, tea may help a migraineur for a few minutes (a migraine specialist told me decades ago that the simple act of eating will relieve migraine pain, but only while you are actually eating, so that only goes so far, not to mention the fact that the very thought of food or drink during a full-on attack ushers in further suffering).

Or yes, tea may relieve a very slight headache, or help during the prodrome phase, or help clarify one’s mind in the postdrome phase. 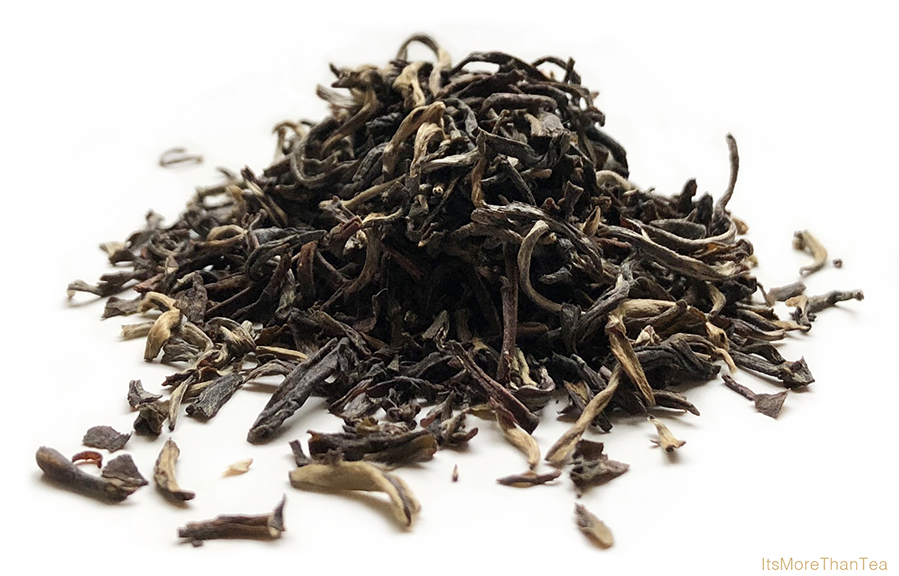 You see, first of all you need to know what you’re even addressing.

Although 11% of the world’s population has migraines, pain ranges from mild to completely disabling (Lipton et al. 2017). Clearly, no one remedy is likely to fully address this neurological disease. And migraine itself has various stages, with each stage having unique characteristics, experienced by each individual differently.

But anyway, let’s take a look.

First off, Migraine.com has it correct when it states that “there is no scientific data to support using tea to prevent or stop a migraine attack” although it then lists teas that migraineurs may use: green, peppermint, ginger, chamomile, and feverfew.

HealthCentral.com adds lavender to the herbals list, and black and white tea to the C. sinensis list.

So we already have a dichotomy—there are teas (C. sinensis) and there are herbal teas (most of them caffeine free, and more accurately called tisanes). I’m going to address some of the herbals first.

Peppermint and ginger are on pretty much every list because both have long been used to settle nausea, nausea being something that many experience during a migraine.

This aromatic herb has been greatly studied—or at least peppermint oil has been studied—for possible use to ease postoperative-, chemotherapy-, and pregnancy-induced nausea.

Results, however, are sort of all over the place. For postoperative nausea, peppermint oil seems to have had about the same impact as a placebo in some studies, whereas others have shown that the oil does seem to work.

Likewise with nausea associated with pregnancy, using peppermint oil aromatherapy. But some studies suggest that ingesting the oil may help alleviate nausea from chemo. Notice that none of these were done with actual tea.

The Penn State Hersey Medical Center website, however, says that, in the case of indigestion,

Peppermint calms the muscles of the stomach and improves the flow of bile, which the body uses to digest fats. As a result, food passes through the stomach more quickly.

They also say that “one small study suggested that peppermint applied to the forehead and temples helped reduce headache symptoms.” But frankly, this could be because the burn of the oil distracts you from the headache (speaking from personal experience), and of course this is applying oil, not drinking tea.

Yet peppermint tea is still widely recommended for indigestion, nausea, and headache. So does it work?

Well, if it works for you, it works. And there are few risks associated with drinking a cup of peppermint tea. Its potent aroma and icy flavor certainly do demand some attention from you, which in itself may help distract, calm, center.

This hot spice, like peppermint, is supposed to help settle the stomach and  relieve nausea. The National Center for Complementary and Integrative Health arm (NCCIH) of the CDC (Sept 2016) says that ginger:

may help to control nausea related to cancer chemotherapy when used in addition to conventional anti-nausea medication.

But note the “may help” and the fact that the patient is already taking anti-nausea meds!

Still, there are certainly lots of studies indicating that ginger can help with nausea from chemo, pregnancy, post-surgery, and so on. However, the ginger is given in capsules, not tea.

I did find an interesting study that probed the antioxidant qualities and flavonoid content of tea (C. sinensis) and ginger; they found that the two worked synergistically, at least in a lab setting. Basically, adding two plants together in this case provided benefits greater than each one alone. The authors go on to say:

Hence we suggest that the combination of phytochemicals from different sources should be promoted to enhance the health benefits derived from them. (Makanjuola et al. 2015)

This is similar to the recommendation that we eat plants of different colors and textures during the course of the day. By doing this, we tend to get a greater spectrum of nutrients.

But getting antioxidants is different from quelling nausea.

Still, ginger definitely does confer health benefits, and even more so when combined with tea. So will ginger tea—either made solely with ginger root or combined with tea leaves—relieve nausea?

If it works for you, then yes. 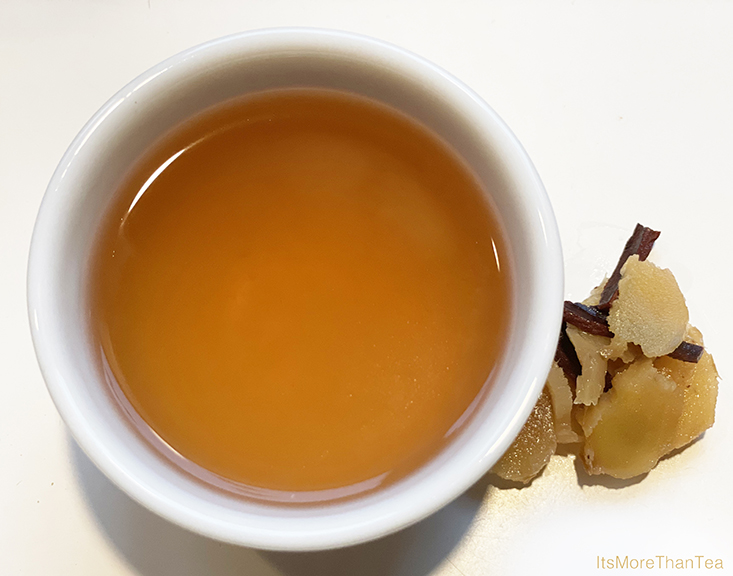 But more specific to migraine, a 2013 study compared the efficacy of ginger powder with that of sumatriptan, a drug that aborts migraine in some people. I unfortunately could access only an abstract, but the results are exciting:

The effectiveness of ginger powder in the treatment of common migraine attacks is statistically comparable to sumatriptan. (Maghbooli et al. 2013)

A 2018 study found that given with the non-steroidal anti-inflammatory ketoprofen (by IV), ginger improved pain reduction. Here too there seems to be positive synergy. 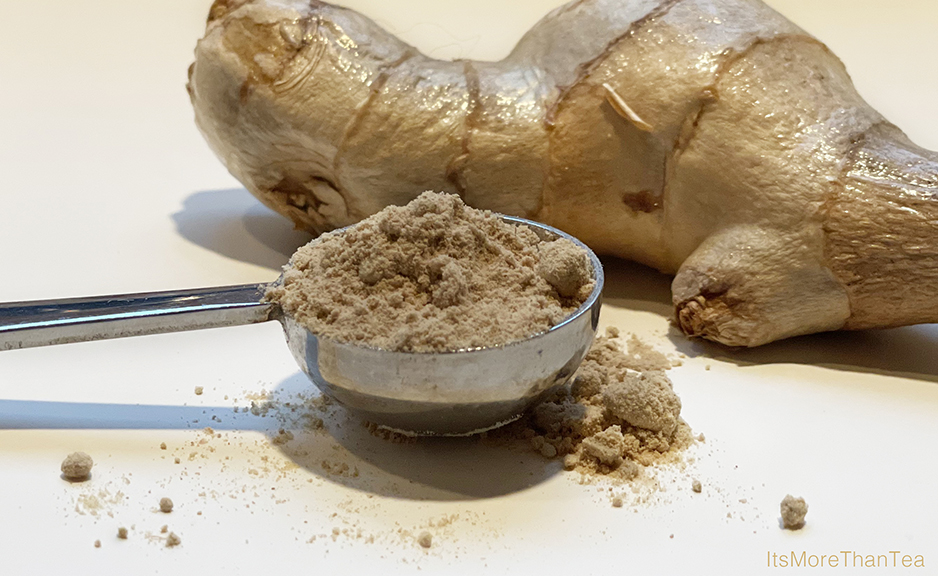 These preliminary studies may eventually lead to new treatment options for migraineurs, which would be great. Although someone may think that there are already plenty of options to treat migraine, the sad truth is that few of them were developed specifically for the disease, and that there are many people who don’t respond to any of them.

I’ve already written more extensively about this herbal, so please see my earlier post. Will it help you relax, thereby helping with a tension headache? Maybe, maybe not.

Migraine quite clearly is accompanied by stress—the worry about getting a migraine during an important event, the unbelievable pain, the brain fog that lingers, and so on. Lavender tea is supposed to help with anxiety, thereby preventing or mitigating stress-induced headaches.

Lavender oil supposedly has some similarity to benzodiazepines (e.g., valium, xanax), but where does that leave lavender tea?

Studies have been done on the use of lavender for a variety of conditions, but there hasn’t been enough high-quality research to allow definite conclusions to be reached about its effectiveness.

So, if you find lavender tea calming, then it works for you.

Through this cursory look at some select herbals and a quick dive into research, I did learn that ginger may indeed may actually help with migraines specifically, as a possible substitute for a triptan (a drug that comes with considerable side effects). I didn’t expect that, and I truly hope this pans out!

And, just maybe, there is a tea (well, technically a tisane in this case) that “fixes” x!

In a future post I will take a look at the effects of actual tea (C. sinensis) on migraines.

2 thoughts on “Can Tea Relieve Migraine?”