A Brief Look at Goldenrod

Meanwhile, goldenrod’s showy flowers provide nectar to butterflies (including monarchs) and both nectar and pollen to bees, especially specialist bees; its seeds are eaten by songbirds.

Goldenrod, a perennial in the sunflower family, is native to North America and requires little maintenance. The genus name, Solidago spp.—“solid” or “whole” (solidus) and “to act/make” (ago)—refers to its use in traditional medicine, “to make whole.” There are various species, including Solidago odora, or sweet goldenrod, whose leaves smell like anise when crushed.

Consuming goldenrod’s leaves and/or flowers has a long history, with Native Americans using the plant:

to cure headache, ulcers, stomach spasms and wounds, including the saddle sores of their horses. Solidago bicolor, a variety native to dry woodlands, was called bellyache weed, and colonial observers in the Carolinas of 1705 reported that natives favored it as “a preserver of sight and strengthener of the brain.” (Sudol 2004) 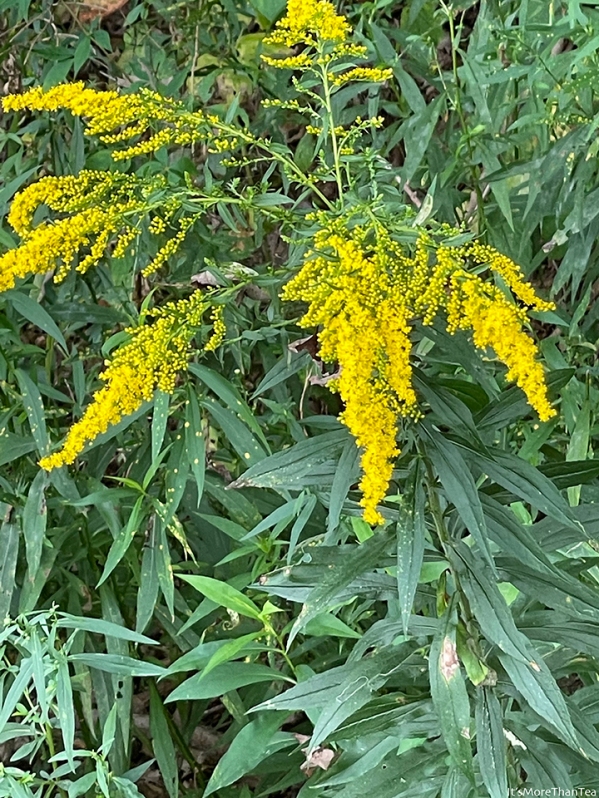 When American colonists pledged off tea after the Boston Tea Party, they turned to other plants, including goldenrod, which became a key ingredient of “Liberty Tea.”

In his 1884 Tea Leaves book, Francis Drake recorded Susannah Clarke’s 1773 verse in which she enthusiastically espoused the virtues of brewing non-tea herbs:

We’ll lay hold of card and wheel,
And join our hands to turn and reel;
We’ll turn the tea all in the sea,
And all to keep our liberty.

We’ll put on home-spun grabs,
And make tea of our garden herbs;
When we are dry we’ll drink small beer,
And FREEDOM shall our spirits cheer.

Goldenrod Tea (and the problem with foraging for your own)

I selected some stems (picked by my husband) to try goldenrod tea for myself, realizing that they’ve already peaked some time earlier (as said husband pointed out—several times—along with reminding me that he had suggested that I do this experiment at least a week ago).

But rather than wait a year for next summer’s bloom (as same husband recommended), I went ahead and cut up some leaves, trying to get mostly the smaller and more tender ones, along with a few blossoms. I poured 4 cups of boiling water over 2 cups of goldenrod and let it steep for 15 minutes. 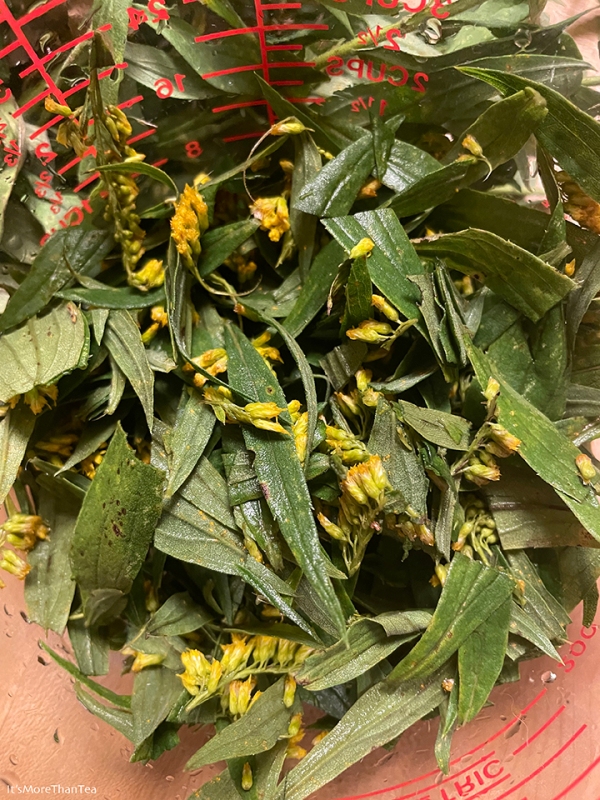 The brew was a lovely goldenrod color with an earthy and strongly green vegetal aroma.

I wish I could enthuse with Susannah Clarke and declare that I’ll happily make tea of garden herbs, but no. Definitely and conclusively no.

The tisane’s full-bodied and fresh vegetal flavor rapidly gave way to a sharp and disagreeable bitter aftertaste that lingered, utterly destroying any pleasantness of the first notes. I considered adding honey but decided not to ruin my local honey. 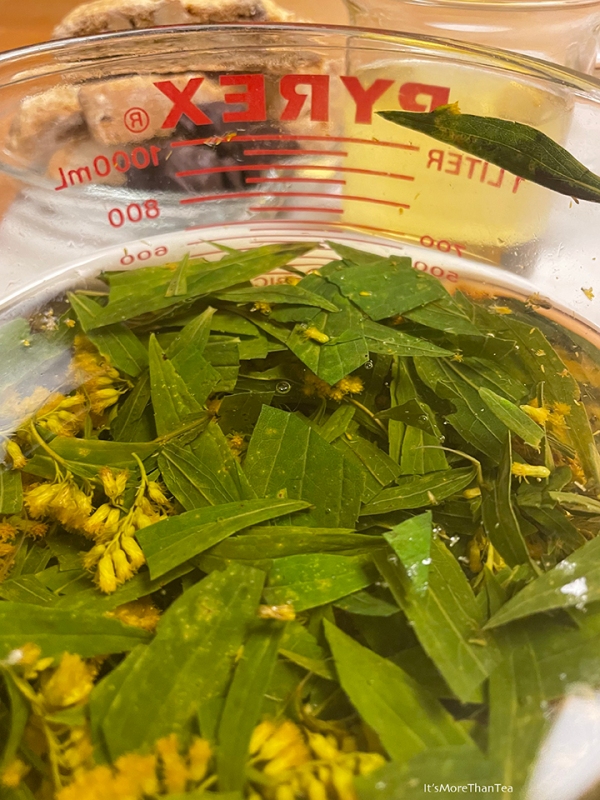 There are several things to be learned here.

First of all, there’s a good reason to eat things when they are at their prime. I messed this up by waiting too long. Yes I was busy and didn’t realize quite how long the flowers had been blooming, but it’s not quite fair to judge something that wasn’t done correctly.

Second, mature leaves generally have a more pronounced (and bitter) flavor than young leaves. This is why young leafy greens and baby vegetables are more mild than fully or overly mature greens and veggies.

Third, I’m pretty sure I had the wrong species of goldenrod for making a palatable tea. With some 150 species, what are the odds of us randomly picking the right one?

Fourth, these goldenrod leaves have been damaged by pests. This damage will have changed the leaves’ chemistry as the plant fights off its attackers. In the case of goldenrod, maybe these changes are a bad thing when it comes to flavor.

In tea (Camellia sinensis) leaves, sometimes the damage can be a good thing (see my post, Nilgiri Frost Tea, and How Tea Leaves Respond to the Cold, for examples) but the tea producer has to harvest and process the leaves after exactly the right amount of damage (and consequent chemical changes) has occurred.

Despite the bitterness, I wouldn’t dismiss goldenrod tea altogether. I think those first pleasant notes might be what the tea is actually supposed to taste like. Next summer I’ll have to give this another go.

Assuming they aren’t toxic (or in the case at hand, utterly too bitter to drink), plants are healthy for us, some more so than others, often depending on what and how many polyphenols are biologically available to our bodies.

So where does goldenrod fall in the spectrum? Are claims of anti-inflammatory properties valid? Is its purported role in treating infections true?

Studies abound, including a 2020 review of its medical use and its actual pharmacological activity. Unfortunately, the conclusion is definitely not conclusive:

The evidence concerning its [goldenrod’s] potential benefits is mainly derived from non-clinical studies, some effects are rather modest, whereas others are more promising, but need more confirmation in both non-clinical models and clinical trials. (Fursenco 2020)

Therefore, as is the case with many herbals, have goldenrod tea if you enjoy the flavor. However, there’s probably little point in drinking it for purported health claims alone, especially if you don’t like it.

And please don’t judge goldenrod tea based on my experience! 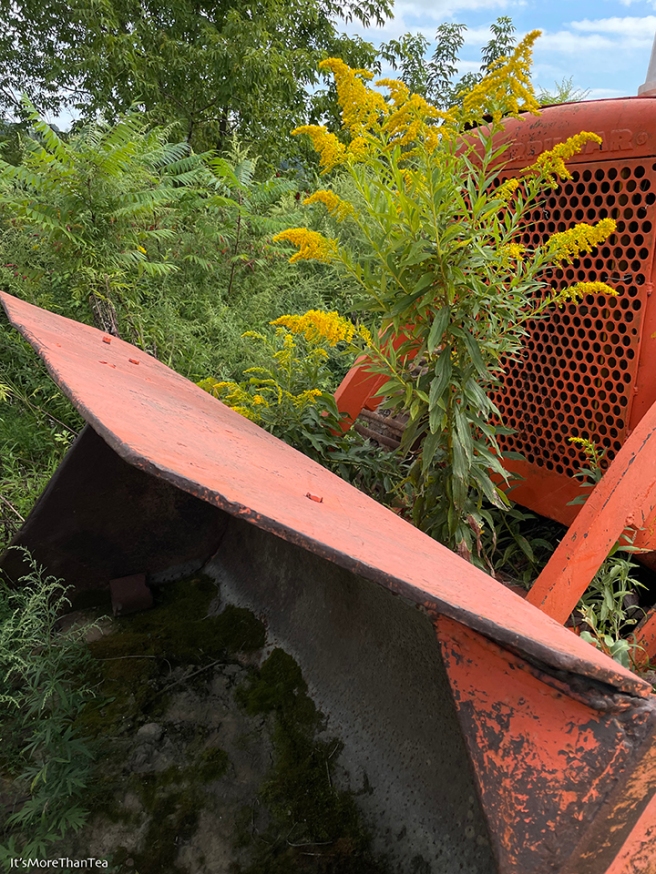