Pretty much any item you pick up can teach you something—from the details of its manufacture to why it exists in the first place.

In England, the Staffordshire area (see previous post) had a deep history of making pottery so the potteries readily accommodated increased demands. Eventually the area was humming along with some 2,000 bottle ovens, and many manufacturers—more than 1,500!—comprised the Potteries.

One such was Arthur Wood, established in 1884 but evolving from ancestors Ralph and Enoch Wood, who began making pottery back in the 1700s.

Like many pottery companies, the name changed as partnerships formed and dissolved (Birks):

Finally, the company was bought out in 1989, which dates my teapot to the years between 1928 and 1989. Although the company made various wares, they specialized in teapots.

My sugar bowl, while decorated with the same pansy pattern as the teapot, was made by Melba Kitchenware.

Historically, four independent companies used the name “Melba.” Of these, H Wain & Sons was likely the precursor to my piece: their factory was called Melba Works and their marks are very similar to that on my bowl. 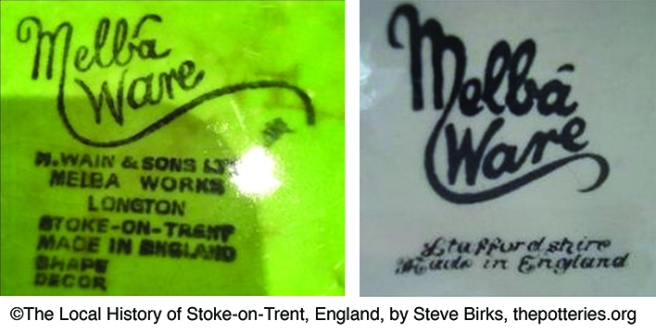 They operated from 1946 to the mid-1980s, placing the sugar bowl firmly in the twentieth century.

And those identical pansies?

While some china was (and still is) hand painted, these pansy-decorated pieces were not. You can easily see a sort of dot matrix-type pattern within the flowers when you look more closely.

Transfer prints were used already in 1755 by Sadler and Green. That is, decorations could be transferred to pottery by applying ink to a copper plate that had been engraved with the pattern and then pressing that plate against the pottery. The pattern could be left as-is or colored in by hand, sort of like paint-by-number. By the early 1800s, color transfers were used.

This process allowed faster production with less-skilled labor, which in turn made the ware affordable to the middle class.

A hundred years later, in 1851, an even more foolproof method was developed—and is still used today by companies like Duchess China.

Rather than transferring a pattern, a pattern sheet, or lithograph, is applied by hand to an item’s moistened glazed surface and smoothed with a sponge; the item is then fired, adhering the pattern to the glaze.

That’s why the sugar bowl can say “hand crafted,” and that’s how at least three different companies turned out pieces that boast nearly identical decoration.

Today, inexpensive ware is mass produced, and we assume that no actual person applied  decoration.

So any teapot, for instance, can tell a story—because why and how it was made tells us in part who it was made for. Where once that hand-applied lithograph made an item accessible to more people, today that same hand-done element makes it pricier and perhaps less affordable.

Yet the purpose of that teapot, the why (politics of domestically made vs imported Chinese ware aside), remains the same: to brew, serve, and share the beverage that captured the world.

One thought on “My Tea Set: Why the Flowers Match”