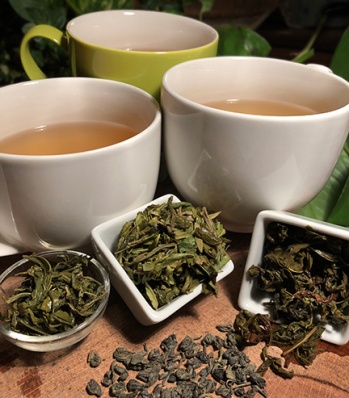 This week brought several news articles relating to toxins that might be lurking in your tea.

I’ve addressed this issue before (Poison in My Tea?), looking at research and considering some of the avenues for contamination, but here’s the latest:

This week, Yahoo Finance reports that the Organic Consumers Association has sued Twinings North America, Inc., and Associated British Foods PLC for some of their labeling, marketing, and sales of Twinings Tea.

Although touted as “pure” with “100% natural ingredients,” independent testing has apparently indicated the presence of glyphosate, thiacloprid, and bifenthrin in some varieties of Twinings Tea.

But are the toxins themselves a problem?

That rather depends on your source of information and how the facts are presented, or interpreted.

According to the National Pesticide Information Center (2019), the herbicide glyphosate is largely eliminated from our bodies after ingestion, and:

Animal and human studies were evaluated by regulatory agencies in the USA, Canada, Japan, Australia, and the European Union, as well as the Joint Meeting on Pesticide Residues of the United Nations and World Health Organization (WHO). These agencies looked at cancer rates in humans and studies where laboratory animals were fed high doses of glyphosate. Based on these studies, they determined that glyphosate is not likely to be carcinogenic. However, a committee of scientists working for the International Agency for Research on Cancer [IARC] of the WHO [World Health Organization] evaluated fewer studies and reported that glyphosate is probably carcinogenic. [emphasis mine]

Yep, that last study, which is somewhat dismissed by the National Pesticide Info Center, also concluded there was

“strong” evidence for genotoxicity, both for “pure” glyphosate and for glyphosate formulations. (IARC 2016)

Further, to bolster their argument, the IARC (2016) states the following:

The IARC Monographs evaluation is based on the systematic assembly and review of all publicly available and pertinent studies, by independent experts, free from vested interests. It follows strict scientific criteria, and the classification system is recognized and used as a reference all around the world. This is because IARC evaluations are based on independent scientific review and rigorous criteria and procedures.

To reach these conclusions, IARC reviewed about 1000 studies. Some of the studies looked at people exposed through their jobs, such as farmers. Others were experimental studies on cancer and cancer- related effects in experimental systems.

If some 1,000 studies suggest that glyphosate carries both carcinogenic and genotoxicity risks, I’d prefer that my tea was glyphosate-free.

Oh, that thiacloprid and bifenthrin?

Neurotoxins, whose allowed levels are mandated by the EPA (see thiacloprid, for example). Allowable, yes, but in a product labeled as “100% pure”? Hence the lawsuit.

As consumers, we ought to be able to trust that the products we buy match their representation. If pesticide and herbicide levels are within “safe” limits, that’s fine. Just don’t lead us to believe that they aren’t there at all.

A Reminder about Lemons

I love dropping a lemon slice into a nice iced Ceylon tea. While I give my lemons a cursory wash, I also sometimes ask for a lemon wedge when at restaurants.

However, as David DiSalvo points out, washing is unlikely to remove all pesticide residue  and restaurant lemons may or may not be washed at all (Forbes 7/9/19), so either way, my drink is likely contaminated.

DiSalvo cites studies showing that up to 95% (!!) of lemons have pesticide residue. Further, they may carry salmonella and E. coli as well.

He advises us to simply squeeze the juice into our beverage, minimizing the dangers.