The Decline and Renewal of Tea in Korea

When tea is part of a country’s culture early on, it’s interesting that it can fade from popularity. But such was the case in Korea, when Confucianism displaced Buddhism. Ramifications were culture-changing.

The Choson Dynasty made a big push to eliminate Buddhist influence in all aspects of life including government, culture, and the economy. All aspects of tea cultivation and production made a rapid decline with the seventeenth century and start of the Choson Dynasty with its focus on monks and nobles as a privileged class accustomed to boasting its wealth and prosperity. Today, we see a lifestyle which gave up tea long ago in losing out to the forces of Confucianism. (Chon 2002)

Tea gardens were neglected and even destroyed. Eventually, tea was again planted, although not until the 1930s. However, this was by the Japanese during their early 20th-century occupation of Korea, when they began commercial production in Boseong, using seeds brought from Japan.

However, this plantation, too, languished when the Japanese left Korea in 1945. But this time the hiatus was shorter. Jang Young-seob bought and restored the plantation in the 1950s and now nearly half of South Korea’s tea comes from the Boseong area. 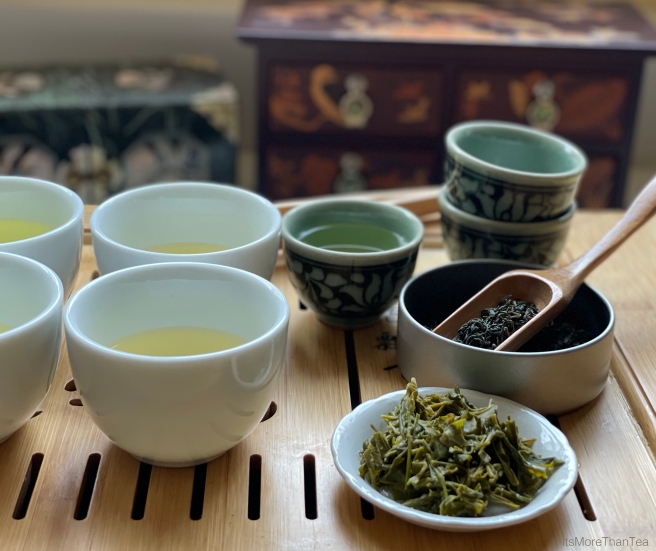 DNA analysis of tea plants in South Korea demonstrates that even today, the plants reflect their origin.

Although all are Camellia sinensis var. sinensis, those in the Boseong region still genetically match Japanese tea whereas the other plants in South Korea are more genetically diverse and probably derive from seeds/plants from China (Satoru Matsumoto 2004).

Thus, in the 2021 Korean Green Tea Luxury Gift Set from Teas Unique (see my previous post, Korean Green Tea), two of the six samples will be from plants derived from Japan tea seeds, whereas the others are genetically different (most likely from China).

Today I tried the two from Japanese origin: Boseong Sejak and Daejak, both orthodox first-flush green teas. They were grown on a single estate in the village of Unrim along the Boseong River in South Jeolla Province.

According to the Teas Unique website, hand-plucked leaves from Boseong are hand roasted in a wok and dried, nine times. If the leaves are wok-roasted rather than steamed, I’d expect the tea to be somewhat more like Chinese (wok-roasted) teas rather than Japanese (steamed) teas.

However, according to the information specific to each Boseong tea (see, e.g., Boseong Sejak), the leaves are “wilted, steamed, rolled, and dried. Lightly roasted prior to packaging.” So, not entirely sure if a wok was ever involved but I’m guessing not.

The Sejak, true to its being an early harvest and having been steamed to prevent oxidation, keeps its bright color and fresh flavor whereas the Daejak reflects its later harvest with its robustness and deep yellow cup. These brewed teas are just beautiful to look at!

I brewed a teaspoon of leaves in 6 oz of 180°F water for 2 minutes. After the first steep, the Sejak (top) was a light yellow with green hue. I find the green color is far more pronounced in photos than by eye.

Delicate yet flavorful, this first steep was a lingering grassy and savory. As expected with more mature leaves, Daejak was more yellow in color with a robust flavor, accompanied by a slight bitterness and astringency on the palate. 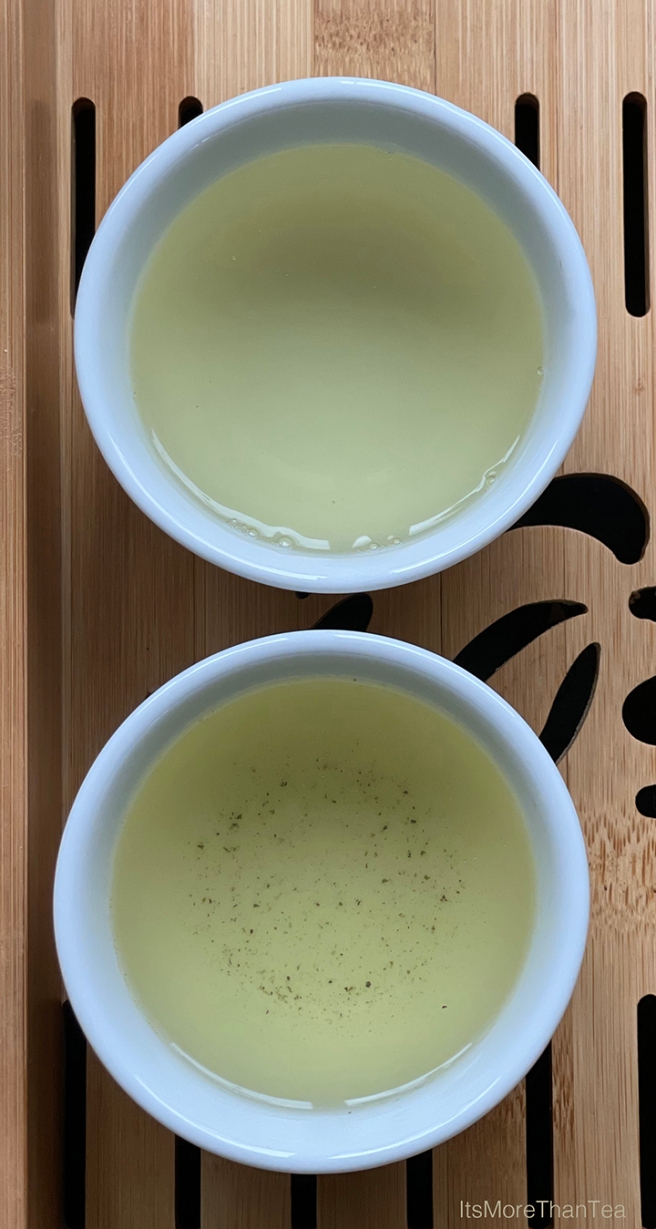 Round two of the leaves brought out deeper color and flavor—by a lot! The Sejak was far more flavorful, starting out vegetal and then ending with that not-unpleasant slight bitter note and a bit of astringency. The Daejak was also stronger in flavor, vegetal at the back of the mouth and on the palate, lingering, but without bitterness.

Many of the largely intact leaves remained partly rolled. The small Sejak leaves were a bright green whereas the larger Daejak were dark to olive green.

These leaves have a lot more to offer! I loved the third steep of the Sejak, with its full-bodied flavor. That bitterness was ever so slight and the vegetal and savory notes were lovely. The Daejak, on the other hand, was becoming more subdued.

Integral to the experience of tea is the rewards of paying attention to how the exact same leaves can offer different characteristics every time they’re steeped!

Buddhist monk Cho-ui (1786–1866) spent over forty years secluded near Mount Duryun, in what is now South Jeolla Province where this tea was grown. Cho-ui believed that drinking tea meant sharing in the “meditative bliss of experiencing the joy of the dharma (universal truth)” and that “because you drink of tea’s undefiled spirit and energy, the day of great enlightenment cannot be far off” (Barnes 2014).